One thing must be clear for anyone who really wants to taste the authentic local cuisine – Jamaica is much more than jerk chicken or fish.

If jerk chicken or jerk fish is on everyone’s lips when it comes to traditional food choices in Jamaica, let us tell you that, if you stick to that, you’re gonna’ be missing the whole point and essence of the Jamaican cuisine. The reason why this dish became so famous is, probably, because a long time ago, one rushed traveler hurried to taste some Jamaican food and this was the only one available. So he liked so much that he spread the word until, the result was the fact that, nowadays, everyone blindly orders the jerk chicken or fish for a traditional meal in Jamaica. Not bad, mon. But far from the real and unique taste of our food!

When it comes to food, Jamaica is irie! Because of our diverse background, our food has become distinct in its own right. Our dishes are mostly combinations of different cuisines from Asia, Southern US, Africa and Europe. Each culture brought their own food and customs to Jamaica. The food can be very different from neighboring islands because of the techniques and aromas from these immigrating cultures.

The island is bursting with flavor, ranging from lush tropical fruits, vegetables and spices to one-of-a-kind coffee beans and innovative combinations. Everything you eat here will have a distinct spiciness that’s incredibly delicious and uniquely Jamaican. Even a simple pot of rice&beans or a bite of Jamaican patties are going to be a delightful explosion of taste, spices and aromas. 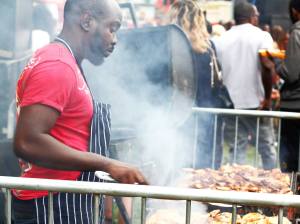 The best way to try it is to avoid familiar fast food restaurants or fancy resorts and discover the diversity of the Jamaican way of life through the markets and street food. If you’re a fan of the ever-popular all-inclusive resorts, you’ll have trouble finding the real taste of the Jamaican cuisine. But if you prefer what’s local and traditional – and you’re not afraid to eat from an authentic street food grill equipped with an old-fashioned 10 liters cauldron you might make your way to a true Jamaican feast.

Let’s take a look at the first 5 dishes that make up the island’s kitchen Pride!

The traditional Jamaican breakfast takes getting used to, but after spending some time on the island it becomes addictive. Resembling scrambled eggs, the dish is a combination of codfish and the locally grown ackee fruit. Ackee was brought to Jamaica in the 18th century, and grows on the island hanging in pod clusters from the tree. To be prepared it needs some time and experience because the fruit is poisonous if eaten too soon before it’s ripe. It resembles a small walnut, and bursts open when it’s ripe revealing a black seed inside. Once open, the fruit surrounding the black seed is extracted and prepared into a dish that looks an omelette when it’s done. It’s sweetish and creamy taste contrasts with the salty fish, which, when combined with onions and peppers, makes a hearty and filling morning dish. Served with rice, it’s delicious. Ackee and codfish is also a popular filling for Jamaican patties, so if you see this, give it a try.

Jamaican curry goat has its origins from East Indians who used to work on the island. Over time, curry goat has become one of the major examples of true Jamaican cuisine. It is a ribs stew, slow cooked, that is full of flavor and tender to the bone. It is pumped with garlic, onions, ginger, thyme, hot peppers, and lots of Jamaican curry that blend peacefully with the meat. All spices and slow cooking make this goat sweet to taste and delightfully soft. We often serve it with potatoes and carrots thrown in along with some fresh herbs. Most often it’s served with peas and rice on the side. Curry Goat is one of the best meals for celebrating special times and special guests in our home. 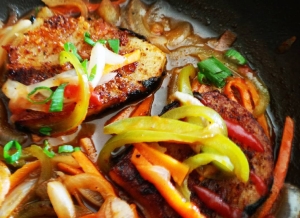 More exactly, this is pan-fried with salt and pepper, then dressed with a simple but winning combination of vinegar, onion, garlic, long chopped bell peppers, and, of course, scotch bonnet pepper. Usually it’s a firm, meaty whole fish, like red snapper but it works just fine with other fish as well. Common sides include rice or bammy, cassava bread. If you’re looking for fish in Jamaica, there’s a good chance it’ll be made this way. The term ‘escovich’ generally refers to its preparation, so the ultimate flavor of the dish can be quite different depending on the ingredients.

Escovitch is straightforward to make and has a delightful unique taste because of the combination of spices and  malt vinegar. 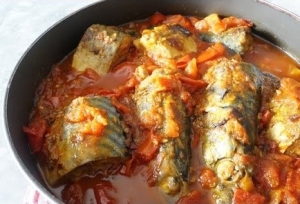 Jamaican cooks make magic with fish and Run Down is a proof of that. This dish is definitely one of the most original and authentic Jamaican dishes you will find anywhere. It is an incredible flavored fish stew cooked in coconut milk or cream, tomato, peppers, lime juice, chilly peppers, onions, garlic until it develops a thick consistency. It is seasoned with scallion, thyme, scotch bonnet pepper and lots of black pepper. The coconut milk is reduced to about a third then, the fish which has been soaked or boiled, is cut into bite size pieces and added to the coconut reduction. Run down is usually made with cod or salt mackerel fish, halibut or red snapper, cooked into larger pieces. It’s called run down because the fish is cooked until it is so tender it falls apart or runs down.

It is delicious served with dumplings or plantains but rice and beans also make a great side dish for the Run Down.

It’s a traditional Jamaican food that many Jamaicans who are away from the country quote as the one dish they miss most from home.

Stew Peas and Rice is any Jamaican family’s favorite and it is a cozy Jamaican stew made with red beans and meat, cooked in an flavored coconut milk broth with an aromatic base of onions, thyme, garlic and Jamaican spices. Despite the name, this stew does not contain peas at all. It is actually made with kidney beans, which are called red peas in Jamaica.

Beef and slices of salted pigtails are a key ingredient, very common for the stew but it can also be cooked without meat. A large portion of red kidney beans is a must for this dish and boiled until slightly cooked. The meat is then added and the pot seasoned until its desired saucy taste is attained.

‘Spinners’ – those little flour, salt and water rolls complete the stew by bringing an indescribably delicious touch to it. The mixture of flour, water and salt is turned into dough then rolled into dumplings. Once dropped in the simmering broth with the meat, the other ingredients and spices, they cook altogether giving a tender density and holding up to volume of the stew.

With all this being said, all there is left to do is getting on the plane and coming to Jamaica. There is no better way of trying our cooking but by coming here. You can leave the rest to us. We know where to take you so that you can see for yourself what we’re talking about.

Translate to my language